One big heaping pile of a metaphor 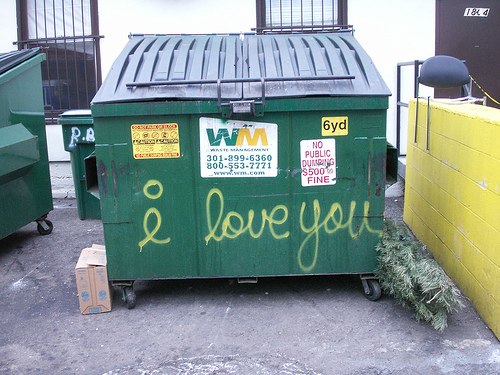 Linden, New Jersey finds itself on the stinky side of the budget shortfall.  Like many cities around the country, Linden was unable to make up a budget deficit of four million dollars–so the city decided to furlough city employees. The city had negotiated with unions to give everyone other than firefighters a three day unpaid furlough.  This gave employees three three day weekends this fall, but the problems started when the city made logistical decisions about when it is best to pick up trash–and changed the city’s Teamsters trash collectors furlough day.

A turf war over city services in Linden turned into a labor dispute last week when the Teamsters filed a grievance on behalf of workers in the sanitation department. The workers are angry that the city rescheduled a furlough, robbing them of a three-day weekend, and are threatening to call in sick en masse, according to one city official.

The city public works department planned to cut trash days on Aug. 12, Oct. 16 and Nov. 27–days that would affect the 8th Ward in each case. […]

But after protests from 8th Ward residents led by Councilwoman Michele Yamakaitis, the city changed the October furlough day from a Friday to Thursday, Oct. 15. It was a compromise that didn’t satisfy residents of other wards, politicians or trash collectors, who had lost their long weekend.

It is now likely there will be no one to pick up trash on Thursday or Friday.