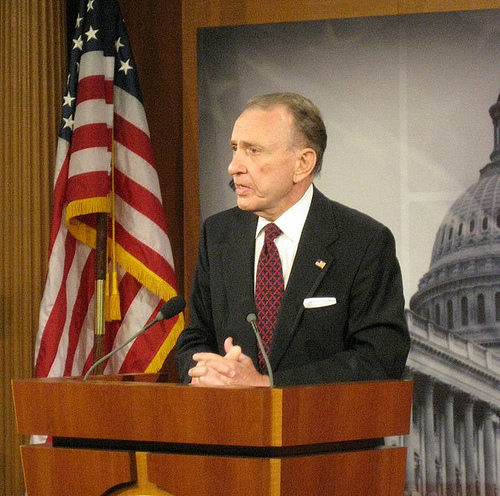 Jimmy Hoffa, president of the Teamsters, is holding EFCA over newly-minted, long circulated Dem. Senator from Pennsylvania, Arlen Specter and publicly considering supporting Rep. Joe Sestak.  Specter’s reticence to support EFCA (despite his recent statement that he would support a “modified” version of the bill) has done nothing to assuage the union’s fears that he thinks for himself.  If he does it this time, he may do it again, a risk that Hoffa is unwilling to take—hence the posturing. Bloomberg News reports:

James Hoffa, president of the International Brotherhood of Teamsters, said his union may not support Senator Arlen Specter in his re-election bid because the Republican-turned-Democrat hasn’t fully supported legislation making it easier for workers to organize. “We’re looking at both candidates right now” and “it’s time for him to stand up,” Hoffa said in an interview yesterday, referring to Specter and his Democratic primary fight in Pennsylvania with Representative Joe Sestak.

Hoffa said Specter, who switched to the Democratic Party in April, needs to do more to help pass the so-called card-check legislation that is one of organized labor’s top priorities. […]

His defection from the Republican Party gave President Barack Obama and the Democrats the 60 votes needed in the Senate to force action on legislation over Republican objections. Specter will face Sestak in the Democratic primary in May 2010. Obama has said Specter would have his “full support” in running as a Democrat.