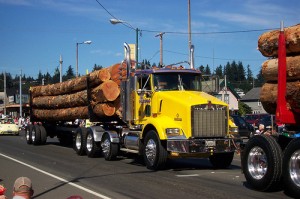 The International Longshore and Warehouse Union (ILWU) engaged in a campaign against the Port of Longview which included obstructing the railway that serves the port. Unfortunately for the demonstrating longshoremen, that’s illegal, so several months later the union’s international president is on trial.

Actually, he’s on trial for the second time (the first trial ended in a hung jury). According to the local newspaper, prosecutors argue that ILWU president Robert McEllrath directed his members to obstruct train tracks during a protest. McEllrath’s attorneys had a different view:

Union attorney Neil Fox, who is defending McEllrath along with Thomas Phelan, said despite his client’s high position in the union, he does not control the members.

“This is not a traditional top-down union,” he said. “It’s a democratic union. … He can’t dictate to all the members.”

So the union’s international president isn’t in charge of a union demonstration. That’s not how the Associated Press reported it back when the demonstrations occurred: “The train […] arrived Wednesday night after police arrested 19 demonstrators who tried to block the tracks. They were led by McEllrath, who said they would return.”

McEllrath’s lawyers will be attempting to convince a jury that the president wasn’t in charge as the trial continues. We’ll see how credible jurors think that claim is.